After writing about the sexual assault complaint about Ioan Pop on September 13, I was even considering going to the October 15 court appearance. It turns out that a court appearance has already taken place before I had a chance to wake up (and I’m still on antibiotics). 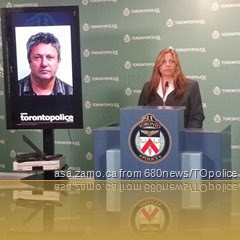 Once again, the news surprise me – and we even have a video of the press conference posted by Crime Stoppers (1-800-222-TIPS) and there’s a shorter version published by the Toronto Police. Here’s a summary:

Rev. Ioan Pop, 54, turned himself in to 41 Division on Monday. The original charge stemmed from an alleged sexual assault at All Saints, a Romanian Orthodox Church in the Birchmount Road and Danforth Road area, on Sept. 3. That alleged assault was interrupted by a couple entering the church, police say.

Det. Teresa Curtis of the sex crimes unit told a Monday press conference that members of the community came forward with complaints against Rev. Pop after police released his photo.

“I think that people came forward because they felt more comfortable,” Det. Curtis said at a Monday news conference. “There’s no [timeframe] for bringing forward these types of allegations. As you know, sexual assaults are under-reported.”

According to victims’ statements, Det. Curtis said the alleged attacks occurred between 2005 and 2011 to women between the ages of 24 and 43. The investigation into Rev. Pop includes eight complainants in total.

Police believe the alleged incidents took place at the Scarborough church as well as several homes throughout Durham Region.

He is scheduled to appear in an Eglinton Avenue East courtroom within the next 24 hours [NB: this was first published September 30].

In this article, I would like to go through my own “evolution” w.r.t. religion and also make a case as to why I believe there is still a chance that Father Ioan Pop is innocent – especially because it is hard and I have no first hand knowledge of this matter. First, let me make a few points that should have been obvious, but for some reason, are not.

Like most Romanians my age, I had an atheist education in school, combined with strong religious influences from my grandmother. She did not spend a whole lot of time with me, and as such her influence was not as strong. I do remember her trying to get me to pray before going to bed.  It was also some sort of peer pressure, as my cousins seemed to be preying, so I tried as well. I felt exceptionally dumb when praying. I had no concept of God, I had serious difficulties imaging there’s a guy in the sky who likes people to fellate him, whether literally or figuratively. I had an intense feeling of ridicule and decided that trying to make my grandma happy wasn’t worth it feeling so inadequate, so I stopped praying and resisted further pressure. I could also see no connection between priests, churches and God, assuming that God existed. It seemed like the afferent rituals were designed to make you feel stupid and crush critical thinking (incidentally, courts of law have somewhat similar customs with their requirement to stand and bow toward the dude on the pedestal with a hammer in his hand and black bedding sheets on).

At school, though it was quite obvious that some of the teachers believed in god, there was no pressure to lick god in any way. The only god we had was smiling idiotically from a portrait hung well above the black board. That god was even less attractive to me than my grandma’s God. I learned to “eat crap” in written documents by copying the language in newspapers and “Congress Reports” as well as “the little encyclopaedic dictionary” I had bought for all the easily accessible crap (Al Gore had yet to release the Internet upon the world, and Britannica was way beyond my budget, nor was it accessible). Those documents and speeches were, in a way, a form of communist prayer.

At one of our PTAP (or something else) classes, we were supposed to learn atheism. The teacher came with a bible and requested that we read it, because we could not critically assess something we don’t know. I never managed to read bible on my own, but I was nonetheless impressed with the open approach adopted by this teacher, versus my grandma’s efforts to get me to pray, which were generally rather short on explanations. The one dude who almost got me interested was probably MC Hammer, but even that wasn’t enough. I later learned that he had massive anxiety issues, like many chicks do. According to some black guy, atheism is a sign of “white privilege”.

I was a militant atheist for most of my youth – that is, I’d pick “fights” with religious people only to prove them wrong and stupid. I’m not proud of that. As a kid I was often loud, obnoxious and “too smart for my own good”. I didn’t mind coming across as a know-it-all. I discovered agnosticism (the wilful decision that you cannot determine God’s existence or lack thereof and consequently you refuse to engage in religious “debates”) quite late, learning it from a Montreal chick, instead of the “cigarette after”.

I thought agnosticism helps you avoid stupid debates that never go anywhere. Instead, it turns out neither militant atheists, nor fundamentalists like you. Militant atheists see agnostics as a group ripe for conversion to their religion. Fundamentalists hate agnostics because they perceive their “indecisiveness” as an attempt to be “godless” and squeeze by.

Right after 9/11 I attended and information session held by the Muslim Students Association at U of T. The Guest Speaker’s main example re: Quran’s “tolerance” was a “law” that allows Muslims to conduct business with Christians and / or Jews, but forbids them to interact as such with atheists and / or agnostics, who are “dogs”. There is no difference in Quran’s treatment (at least in that dude’s interpretation) between atheists and agnostics. That was a turning point for me – it seemed as if choosing agnosticism over atheism in order to avoid conflict was just dumb.

I started moving slowly away from agnosticism toward something I enjoyed more and found it in the Gaia Hypothesis (the strong, “godly” version) – I mentioned it briefly in the conversation with Krossfire. I felt no need to proselytize or worship and I was fine with other people believing in other things.

What I believe in now is not subject to discussion. Maybe it is the Christian God, maybe it’s Gaia, maybe I’m a Wiccan or maybe I went back to agnosticism. I can certainly debate from any position, but my beliefs are only for me to know.

Finally, I promised I was going to write why and how Father Ioan Pop could still be innocent. This article has become way too big, so I’ll develop that argument, time permitting, separately. I’ve already mentioned a little something-something in the comments to the previous article.