I hesitated for one day before writing this article and telling you this story. Maybe that's cuz here in Canada we went back to regular time, "losing" one hour. 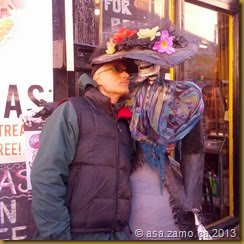 Yesterday there was a small celebration of “the Day of the Dead” here in Toronto, and I attended.

To get the feeling of what is like to celebrate this day in Mexico, you might want to read the National Geographic article linked below (nat-geo-ddlm).

There was an artist singing, but for me, the song associated with this holiday is Sting’s Cueca Solo. Yes, that song is about the thousands of people Pinochet “disappeared” and the way their widows dance with their photo on the national dance of Chile, yet in my mind they are somehow intertwined.

It is quite challenging to discuss anything related to death – even (or especially) suicide. The comments I got for my articles on suicide (5 myths, Sorescu, Pepsi, Nastase and his option) seem to suggest that most readers prefer to avoid thinking about death, especially their own. And, based on my own personal experience and observations, there seems to be a serious difference between the way people deal with death in East vs West.

And that’s really what I want to discuss here.

We often think of the Far East as being crueller, and though there is some evidence of cruelty (sinister-death-fe), I’m not trying to write a scientific paper, but rather discuss my own experiences.

About a decade ago, when I buried my close relative, I got the message of his hospitalization while traveling through the Baltics and Scandinavia. I met and then traveled together with some wonderful Swiss girls who were searching for some very specific (i.e., they had profiled them to the last details) men from Finland/Lapland.

All kinds of interesting and weird things happened. (campersa)

I had to cut my Scandinavian trip short, but one day I managed to visit them in Switzerland, where I spent a few weeks or months (can’t remember). The girls were planning a trip to Costa Rica, but I declined – I had to return to finish up with a trial that, unbeknownst to me at the time, was going to cost me not only a boatload of financial resources, but the better part of the next decade, and more. It was – and still is – like a noose around my neck: the more I try to set myself free, the more it suffocates me.

While I went back to Canada to resolve what I thought was going to be a quick trial, the girls went to Costa Rica – a Switzerland of Latin America, as one girl’s father said trying to assuage his wife’s concerns that they were going alone. And there, the one I spent most of my time with, including some rather intimate moments, and with whom I broke up just before leaving because I don’t believe in long-distance relationships, drowned in a freak accident.

I’ve found it very hard to believe. For the longest time I imagined it’s not true – I was hoping it was some weird joke the girls were playing on me, either to punish me for breaking up or to test my feelings. I was still holding the hope of a joke when I got a photo from the funeral and even talked to her grieving father on the phone. Her father held himself up extremely well, while I had serious difficulties holding back my tears and fighting a breakdown.

There seemed to be a significant difference in the way Protestants and Orientals (though, again, not Far Easterners such as the Japanese) mourn. Whereas in my neck of the woods people pay a priest, cry loudly, shake, throw themselves over the coffin and might even hire older women whose job is to provide the cries and the drama themselves (“bocitoare” in Romanian), the Westerners seem to make a rule out of being dignified and showing a brave face. In parts of Moldova (the easternmost, poorest and most religious province of Romania) people think that a funeral without “bocitoare” is like a wedding without live music (see also: Turt in Oas, Peceneaga, Borlovenii Vechi, Bucovina). I’m not claiming that one approach is necessarily and inherently superior to the other, but I can’t say I’m a fan of the ritualization and hyperbole I see at Eastern funerals. Still, within all this hoopla, the Eastern rites have somehow allowed for a weird mixture of happiness in drama, such as the “Merry Cemetery” at Sapanta, rated by National Geographic as the second cemetery to visit in the world after Pere Lachaise in Paris (nat-geo-t10c) and, closer to our times, “happy coffins” at RomExpo.

Back when my Swiss friend passed away, I sent the surviving friend Can’t Take That Away From Me the Smoke City cover, which still is my fav, but Billie Holiday, Louis Armstrong & Ella Fitzgerald, Frank Sinatra, Rod Stewart, Mariah Carey (original), Gloria Estefan, Fred Astaire, Tony Bennett, Diana Krall aren’t bad either.

As for Toronto, there’s no better place than Kensington Market to celebrate Dia de los Muertos.. 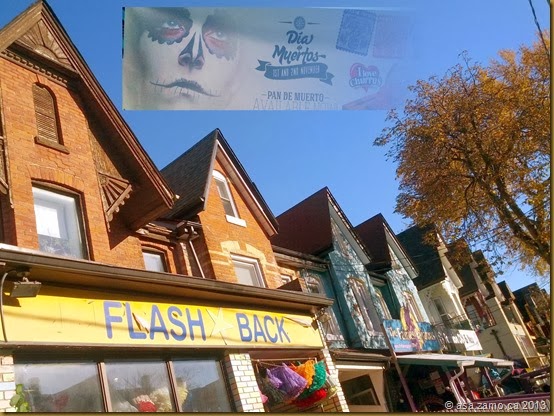