I recently watched a with a rather long title (Cand se lasa seara in Bucuresti sau Metabolism) movie at TIFF13 and I thought I share my views with you. The article is unfinished, but I feel so sick, I might have a brain-wasting disease and I’d better publish it while I still can. 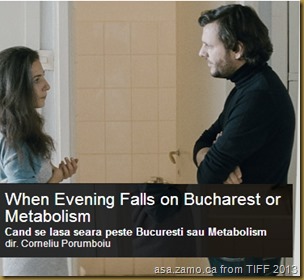 The Toronto International Film Festival is in full swing, and with it, a plethora of uber-hipsters, misunderstood ageing young rebels (ze f), movie buffs and plain-vanilla weirdoes descend on the stylized Hogtown. Even strict liquor laws are relaxed, allowing a number of establishment to legally have the last call for alcohol, normally at 2 am, at 4 am instead.

Weird things start to happen to you. You meet “celebs” in strange situations (I’m not a tabloid, but if you happen to walk the streets early in the morning, things may turn interesting). Even non-celebs act as dumb as celebs. Three days ago, I was in line for a Burger King sandwich – can’t beat the $1.99 value for a big burger, especially after you throw the bread away. And then I hear right behind me “excuse me, are you a model?”.

I figured there’s no way that could be addressed to me, so I continued waiting. Except that the person repeated the question, louder and in my direction. I turn around. A black woman was smiling at me. I say “No”, a bit embarrassed, nervously clenching my wallet, still not sure if she’s making fun of me. “You should be” she says, still smiling. “You have a very beautiful face.” I can think of a few responses, none of them nice. I turn again my back on her, thinking that some people may be able extrapolate your face from your back.

She was way nicer than the two Gypsy women from my youth who accosted me on the streets of Giurgiu with “razi, printule, ca ai dinti frumosi”.

Anyway, for objective reasons, I had no time or inclination this year to look into the movies worth seeing at this TIFF, so when a friend of mine invited me to “When Evening Falls on Bucharest or Metabolism”, I accepted unreservedly. And I was just as promptly disappointed.

With all the Romanian new wave / arthouse creations, I’m open to absorbing something new, insofar as it is either shockingly new and thought-provoking or at least not so earth-shattering, but still highly entertaining. Porumboiu’s latest creation is neither, but if you watched Politist, Adjective, that should not surprise you.

I kept waiting for big a-ha! moment to justify sitting through an entire endoscopy two times, but it never came. It felt as if he was trying to see how much audience-torture he can get away with before being called on it. As far as I could tell though, only one person walked out on the endoscopy footage, which suggests that viewers were either highly cultured or asleep.

All the summaries I’ve read seem to describe the movie in the same way, emphasizing the [in-the-movie] director’s decision to film a nude scene with his lead actress, with whom he’s having an affair.

It's the middle of a film shoot, Paul, the director, is having an affair with Alina, an actress playing a supporting role. The next day is Alina's last day on set. Paul decides to shoot a nude scene with her. But tomorrow is another day. Paul wakes up in the morning, facing his doubts and changes his plans: instead of shooting the nude scene, he tells the producer that he's suffering from his stomach ulcer... Gradually film and life are getting more and more interwoven, taking the shoot to an unexpected turn.

However, the main creative thrust behind this movie is Porumboiu’s need to answer the question “how” he creates, more so than the “why” (va-meta).

The movie thus sets out to explain how Porumboiu makes his movies and how he is limited by his medium of choice (35 mm), which anchors him in shots that don’t last longer than 11 minutes (much like the opening dialogue). The long and somewhat didactic conversation veers into another realm – how the Chinese chopsticks have affected and determined that cuisine, much like the 35 mm roll of film has determined the directorial vision.

After such a semantic tour of force I was really looking forward to the Q&A session at the end (this is also the reason why I held this arthouse creation to more or less “regular” standards. I started by asking if the “colonoscopy” was somehow inspired by a certain Family Guy episode.

My questions seemed to cause consternation at the back of the room among some old ladies. The moderator, Andrei Tanasescu, felt the need to translate my question to the director. Finally, the director, visibly amused, explained that it wasn’t a colonoscopy but rather an endoscopy (a gates difference). In the same vein, I should also explain that that the Family Guy episode (clip on Hulu) is not about a colonoscopy but about a Prostate Exam. And the whole point was to get the director entertained.

And that’s the whole point of any Q&A, especially when you enjoyed the movie. (I did enjoy it, as I gave it 8 stars on IMDB, substantially more than its average at the time. The review published here is more likely due to some illness and terrible headache, the worst I got this year, which subsequently affected my mood. On the plus side, this might cause arthouse fans to watch the movie and commercial purveyors to avoid it, which can’t be a bad thing.)

Think about it: directors and actors usually have contractual obligations to promote their movies, and when you get the same kind of questions everywhere, you get bored fast and your answers don’t sound genuine. And when the question is “why did you do this?” or “why did you kill that character?” it can get annoying. Any artist want you to make your own judgements, so their explanations will be at best terse. In contrast, quite a few people seem to be asking questions at the festival to advertise their intelligence and in-depth knowledge. Their arrogance might be unsettling for the artist, but it is also annoying to me, which is why I always try to keep the artists in a good mood with my Qs.

And sure enough, soon the “film intelligentsia” started asking their silly Qs. I felt the need to ask a second one: “How are the protagonists and events portrayed in this movie similar or inspired by real life?” His first answer was “I don’t cheat on my wife” followed by laughter. His second was the quote above, this time in English. It would’ve been nice to post the recording here, but my phone had long ran out of battery :(.

Finally, I need to say a few words about the credits music. I could’ve sworn he was going to use Pasarea Colibri’s song:

Instead, we were treated to a manea I could not even find on YouTube. The director claims it’s one of his fav songs.

Cornel Porumboiu was born in 1975, like one Daft Punk (and not 1974, like the other), in Vaslui, where PSD had sent Ana Birchall.

Considering that this particular movie has rather low IMDB ratings, while Child’s Pose / Pozitia Copilului has high ratings and is usually an audience favourite, and knowing that CP was posted by “filmulescu” based on an HBO Romania recording (hence, it’s likely to have been seen by many), could it be that Child’s Pose is to Rebel Without a Cause what “The Amateur” is to Validation? It’s not hard to see how “you are tearing me apart” got translated with “te fut in gura! – si pe tine!”.